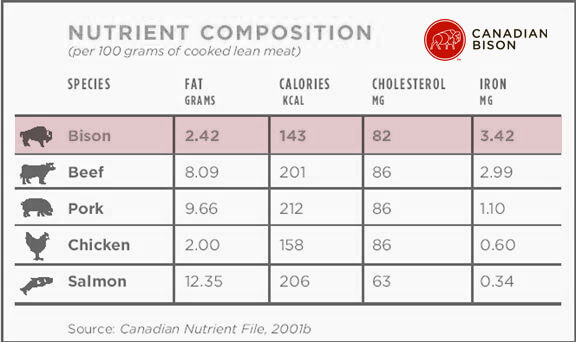 A question I often receive is why did you start farming with bison?

As people that love the outdoors and rural areas, we felt farming with animals, and specifically bison, would allow us to spend the last part of our (productive) careers working outdoors and with animals.

We became intrigued by the bison’s unique ability to thrive and survive in the inhospitable Canadian winters, including surviving the past 10 000 years. Bison are also a true indigenous Canadian species, making them a natural choice.

By choosing to farm with animals that naturally belong in Canada, we hope to practice farming in the least invasive way possible to minimize our ecological footprint as humans.

In my opinion, the modern world has turned beef farming into a conveyer belt industry. During winter, cows are crowded into a barn.  In summer, they graze for a while on pasture or in some instances are still kept in barns and fed. From there they go to feedlots, where they are fattened or “finished”, as it’s called, with an unnatural corn and grain diet. Mass production has been perfected to supply the consumer with an affordable product.

One appeal with bison is that they thrive outside year-round, especially in winter. Quite often on stormy or very cold days when Lizette and I check on our bison, I find it actually quite pleasant to be outside (as long as one is well dressed). Bison farming is a true winter sport and will keep one active during the colder months of the year.

Another appeal was the bison meat. Once we looked into the benefits of bison meat and realize how healthy it was, the choice was a no-brainer. Bison meat is a nutrient-dense food because of the proportion of protein, fat, mineral, and fatty acids to its caloric value.. It is also rich in Iron, Zinc, Vitamin B12, Selenium, and Phosphorus and is a source of Vitamin B6 and Niacin. (1)

Bison evolved on the Canadian plains and grasslands, and contribute to a healthy ecosystem. Their ecological benefits affect multiple other species and the way they graze and interact with pastures contributes to healthy grasslands.  All desirable traits to preserve our land for future generations.

The irony is that the tragic destruction of bison herds of the 18th and 19th centuries, wiped out millions of bison and replaced them with cattle; However, bison is a healthier product than beef.

However, by farming with bison and placing a commercial value on the bison it will help to ensure their continued existence.

Lastly, and certainly not least, are the people involved in Bison farming and conservation. Since we joined the Canadian Bison Association we have always received a warm welcome and met interesting people that care deeply about the animals they work with and the environment. We identify with these amazing people, their strong values and principles, and hope to work with them and learn from them to make a positive contribution to bison conservation.